When it comes to shopping for  Second Life beds, different shopper profiles have to be taken in to account:

These are little details a minority of residents care about, and is a feature that is not found on all Second Life beds. In fact, there are not so many available, so I reached out to a few creators to understand why that might be, and thank you so much for the ones who took the time to share their thoughts.

There are many beds available on Second Life, so I was not about to visit every stores, but instead chose the ones I was aware of and looked into popular brands.

My favorite beds are from Loft & Aria for their PG and Family poses, the esthetic, and the amazing bedding colour presets. Having a closer look at my beds, and then checking other beds in store,  I noticed that their beds have only two sleep animations (one for single and one for couple), and it is the same one across all beds, so this one under-the-cover animation doesn’t match the bedding colours.

Loft & Aria manager explained, “As far as ‘under the covers’ sleeping poses, I don’t think they are too difficult, but it adds a good amount of work in just modeling the blanket covers (usually three different versions) and setting up the scripts each time a bed is made. As far as not matching the theme of the bedding, generally most creators, including Loft & Aria, use AVSitter with the AVProp plug-in which rezzes the cover from the bed contents when the pose is chosen. Contents of the bed are not able to be texture-changed with the texture options for the bed, so they choose a simple white duvet as the best general option.” 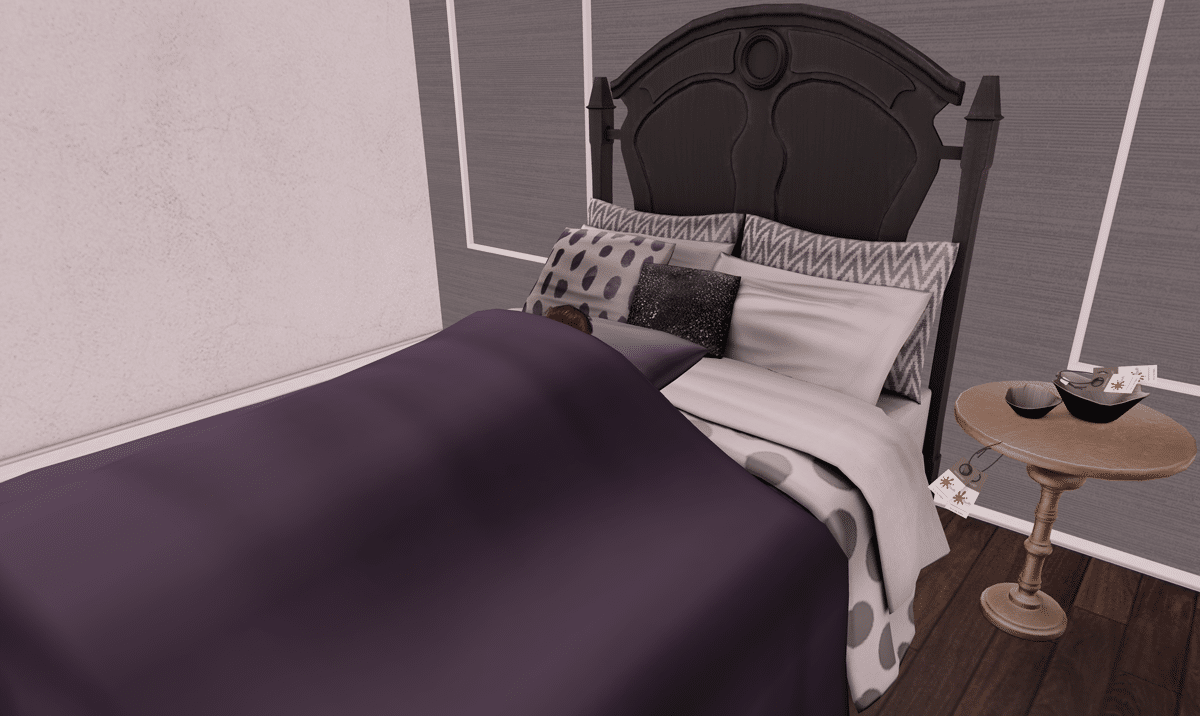 MudHoney has one bed, but judging that it is using AvSitter 1.29, it must be an old bed. Although it has a cover when sleeping by myself, the cover doesn’t show up when I tried the couple sleeping animations.

“It’s not super difficult to add, but the blanket that’s needed is a totally separate model, so it takes extra time for texturing and getting it to look right. There have been a couple of people that have asked for it, but not very many, so I honestly haven’t put much importance on it. And, to be honest, I’m generally rushed for time, so there’s little things like that that I don’t always remember or have time to add in,” MudHoney creator Rayvn Hynes creator, said. 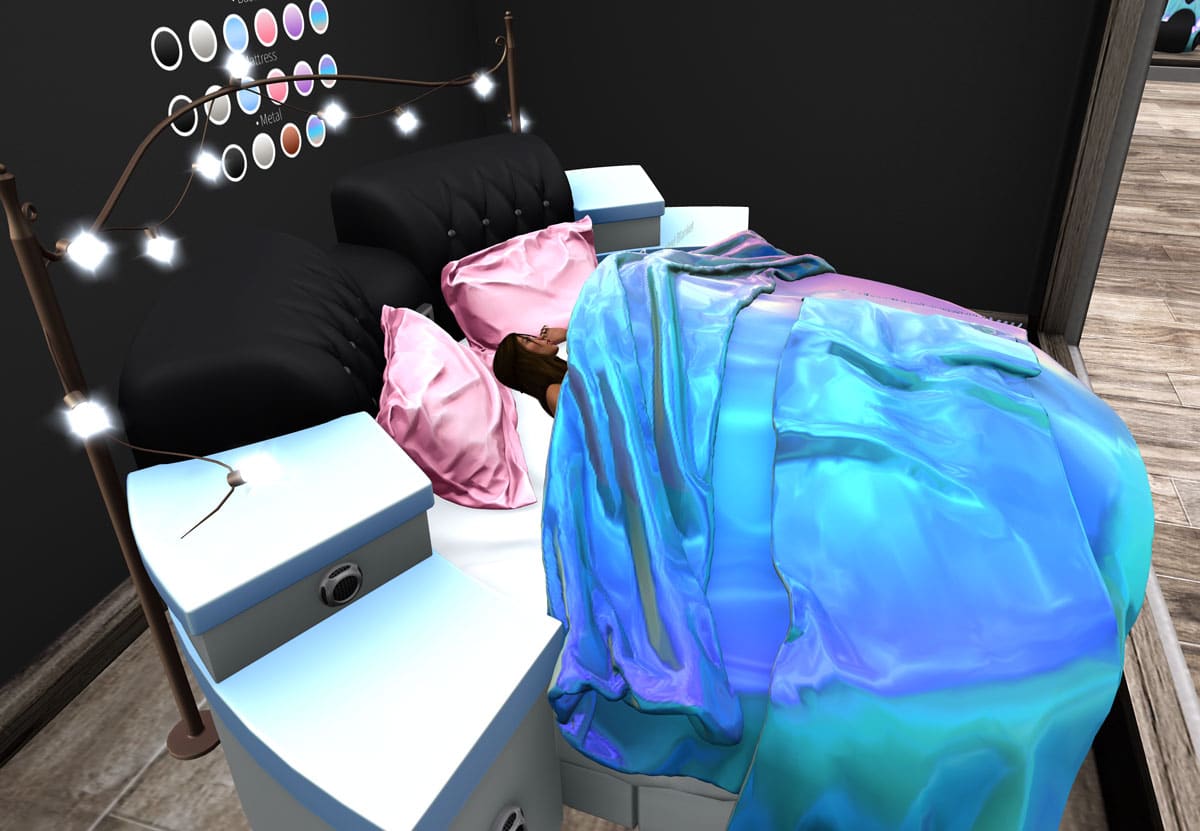 Backbone was first on my list and could only find one bed, and the covers stay put while you sleep. Although it would take some adjustments as the sleeping poses are not statics but the covers are, legs were coming through and that looked weird. It has a few single poses, but quite a few more for couple. the style of the bed is for a specific audience and is 26 prims.
Prices

I tried three beds at Aphrodite.  Two of them keep you covered while sleeping, so unless you can demo the bed, or it is mentioned somewhere, I wouldn’t assumes that all Aphrodite beds have that feature.That one is 21 prims. I looked at that bed a while back, but couldn’t find the demo, so I gave up. They do have rezzers in the adult section, so it might be possible to try all the beds.  However, the owner of Aphrodite shop, Marina Ramer,  confirmed that almost all her beds have that feature. 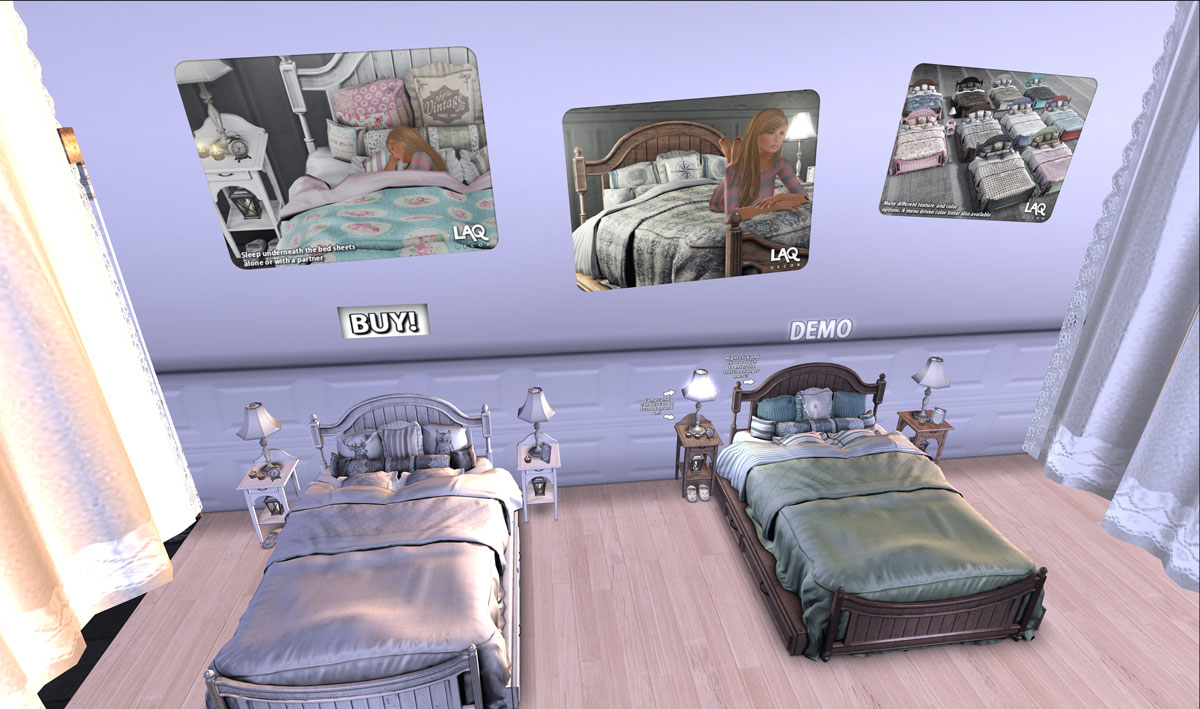 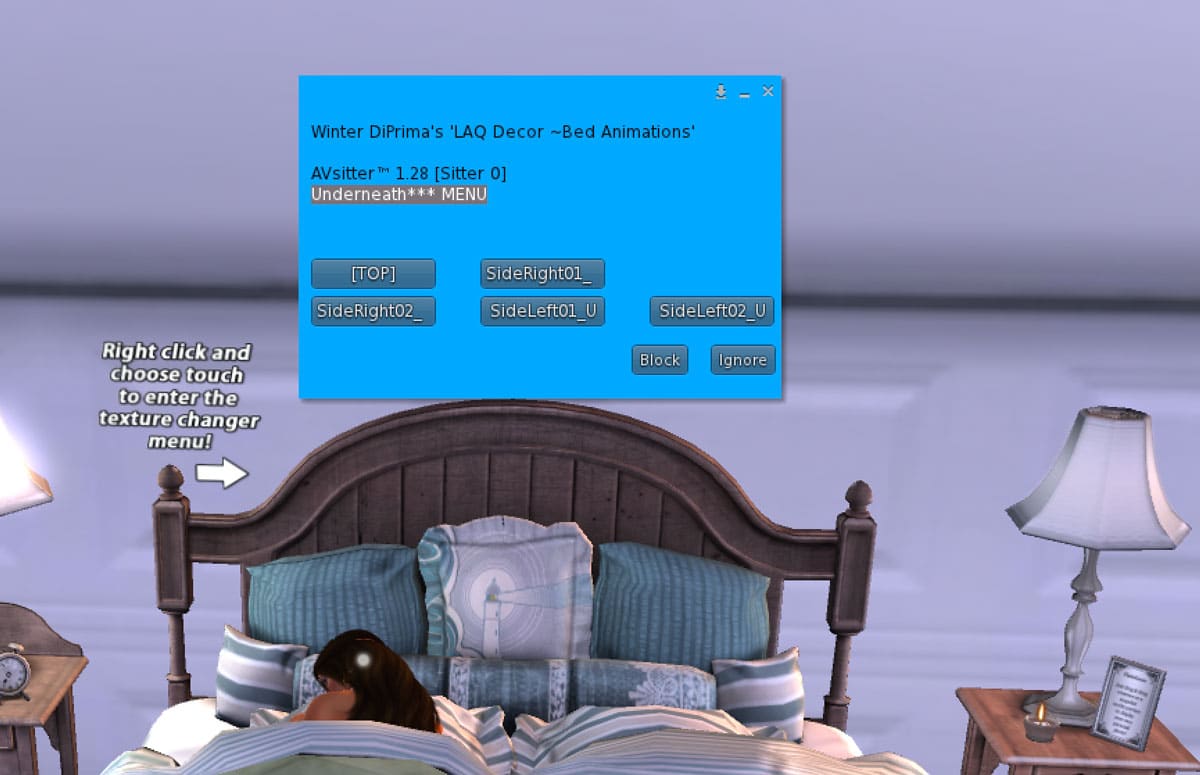 LAQ does the job well, looks great, is affordable at 999L, and is only 9 prims. What more could you want? More style maybe?

All the beds I tried at Bazar did not have a “sleep under the cover feature” but there is one sold on MP that has it, although I couldn’t find a demo, someone else who owns that bed said it worked well for them with the PG version.

Here’s what Apple Pancake (Apple Fall) had to say about it, “It’s not that it’s a complex feature in the sense that it can be done 2 main ways. One is to create a secondary mesh, so you have one bedding mesh ‘flat and made’ and the other one ‘slept under’ that is switched between making parts visible and invisible when in use and not. This just adds more LI both in terms of mesh complexity and scripted complexity which is a big deciding factor when somebody wants to purchase a product. Especially with the growing trend of the Linden Home project it has become paramount to ensure that the customer can get as much as they need in their somewhat limited parcel LI budget, so extra features like that become for the few rather than the many. There is a second way to animate the bedding using rigs and Animesh, but again it just adds more LI, and you bring in the issue of mesh complexity impact and the ‘blobbing’ issue you get with avatars depending on settings.”

I also asked Danny Bourne (r e B o u r n e P r e f a b s) who said he actually never thought about it, which is interesting because it’s so easy to assume as a consumer that content creator should just know what their customers want. Well, they should know their audience, but because Second Life has such a diverse audience that it makes it difficult to cater for everybody.

I’m sure there are more beds available out there, but in the meantime, these are all I could find. Since the Second Life residents requiring that feature are in minority, unless you ask for it, it’s not a feature we will see more often anytime soon.

If you know a brand that offers Second Life beds with ‘under the cover sleeping feature’, or if you have one, please comment below with the details, or contact me and I’ll be more than happy to check it out and add it to this page.