Best 3 Animesh Pets Makers 2021 and others

Since the introduction of Animesh in November 2018, we’ve seen creators coming out with varied types of Animesh pets. Their prices and functionality differ from one creator to the next, so today I’m going to look at the top Animesh pets and their creators available at the moment.

Animesh is short for animated mesh, and allows independent objects to use rigged mesh and animations which means that you can now have animals play animations with much smoother and more realistic movements. You can rezz the object or wear it as companion pet for example. An Animesh mesh enabled viewer is needed to see Animesh pets or objects properly.

One downside to Animesh is that it requires the use of rigged mesh items, which cannot be resized, so once rezzed, it is heavy in prims as it cannot go lower than 15LI.  On the other hand, Animesh is better for the SL ecosystem when rezzed because animated animals use Puppeteer or similar which are highly scripted while animesh usually requires at most 2 scripts.

As a pet companion, Animesh is better and looks more realistic.

Rezz Room has taken the lead in creating Animesh pets which you can wear as companion or rezz. The price is a standard 800L, with some fatpack available for more LL. Rezz Room also also have several Gacha with the Rare one being an Animesh animal.

My first pet was the doberman, which I’ll compare to my partner’s dog from TLC. The doberman is a tad bit hyperactive as an adult dog (maybe?), although I have a friend in RL who has one, and he doesn’t seem to want to settle, ever …

Cats do follow you around sometimes, but they’re not dogs, although this is SL … Cats are more likely to jump on you at the most inconvenient time, so I contacted Bartazar Resident, Rezz Room owner and creator. He replied that at this point it cannot be possible with one pet (more on that in an upcoming post). He’d have to create a second pet just for carry, and a few weeks later if that, he had the second cat to carry available at the store for an another 800L.

My favorite Animesh pet from Rezz Room is the koala, and it’s a shame that it is 70 prims otherwise I’d have many rezzed around Koala Beach, but they are most definitely cute, although it would have been nice if it had come attached to an Eucalyptus tree branch, or some sort of habitat. It is tiny and when on the ground, and koalas are usually in trees rather than on the ground, but the animations are just too adorable.

TLC has been around for quite some time and their first Animesh release was a set of birds, adorable, but this is when I realised the prim cost of Animesh objects… They then released their first dog which my partner got. For the sake of this post I bought TLC Burmese cat companion, so that I could compare it with Rezz Room.  TLC prices are more affordable than Rezz Room, but I would say, you get what you paid for.

SEMotion has also taken the lead with Animesh in a very affordable way, although the breeds and style of companions are more in the fantasy realm. They are mostly Gacha, and their features are limited compared to Rezz Room Animesh pets, but if you are into that sort of stuff, then you are in luck, because the variety of companions is wide.

How do the top three compare with each other?

Rezz Room is the more expensive of the three but offers more features with a menu: different colours options, name change and poses when you need your pet to pose for a pic (which is an important details in Second Life; I mean who doesn’t take pictures these days?). I also think they look more realistic and the animations are pretty sleek.

TLC dog looks cute and realistic, especially in their facial expression. I am not fond of the look of the cat at all. The animations are limited compared to Rezz Room, but when on budget, TLC is much more affordable for a realistic companion.

SEMotion is more fantasy based, but is more affordable than Rezz Room and TLC if you’re just after a fun and colourful companion.

When Black Bantam announced they would be releasing an Animesh pet, I was curious. The animation is so subtle, that I wonder if it is worth it to make it Animesh. The price was the same as what Black Bantam usually charges.

Hextraordinary offers a wide variety of animated animals, ranging from fantasy, to wild animals and pets, and have now adopted Animesh. When they release a kangaroo Gacha, even though most of the fur colours were geared with the fantasy genre in mind, I bought several of them that are now roaming on Koala Beach to replace my set of ancient animated kangaroos that were already high in prims.

Hextraordianary don’t have a huge range yet, but what they have so far is awesome. I mean …

How can one dislike this adorable octopus?

I found two types of Animesh dolphins. One is a rezzer, so anyone can swim with a dolphin, and the other one is your own dolphin, but you can rezz it to let it roam in the water.

One dolphin is by SeaMe. The salespage states:  “Its scripts use FRAMEMOTION to give more smoothness to its movements. It uses ARTIFICIAL INTELLIGENCE to detect its owner and make performance tricks when you ask it to by using Gestures (included in the pack). If you are in the water, below sea level, it will interact with friendly movements next to you or you can choose to swim together.”

We have a few of them rezzed on Aussie Shores. In one tenant’s house, if you’d go in the pool, the dolphin would jump in the pool with you. It was bizarre because most houses have pools, and it was only that one dolphin that would do it. Sam also noticed the  dolphin when he was underwater doing some terraforming. He said the dolphin came up to him and started to play with him.

SeaMe also has an Animesh killer white shark. It does the same as above, plus: “If you are in the water, below sea level, it will interact with friendly movements next to you, but if a stranger shows up, it will attack them and eat their body, piece by piece, until it will releases their skeleton. The victim will disappear completely and will have to teleport to regain their appearance.” As an onlooker, you see lots of red in the water.

It’s a brilliant concept, and to simulate shark infested waters in Australia, we  have a few rezzed in Aussie Shores waters, so beware when swimming … The shark also detects seals ans will eat them.

Now I just need for the SeaMe creator, Solotemiro Veliz,  to come up with crocodiles…. but for now he is working on a panda bear, so look out for those if interested.

The other Animesh dolphin I’m using on Aussie Shores is Swim with Dolphin Rezzer: Enjoy scuba, dolphin ride and dynamic dolphin jumps with your friends.

Both dolphins are great and look the same. As a rezzer, it’s not cheap, but well worth it, and anything by SeaMe is worth it too. 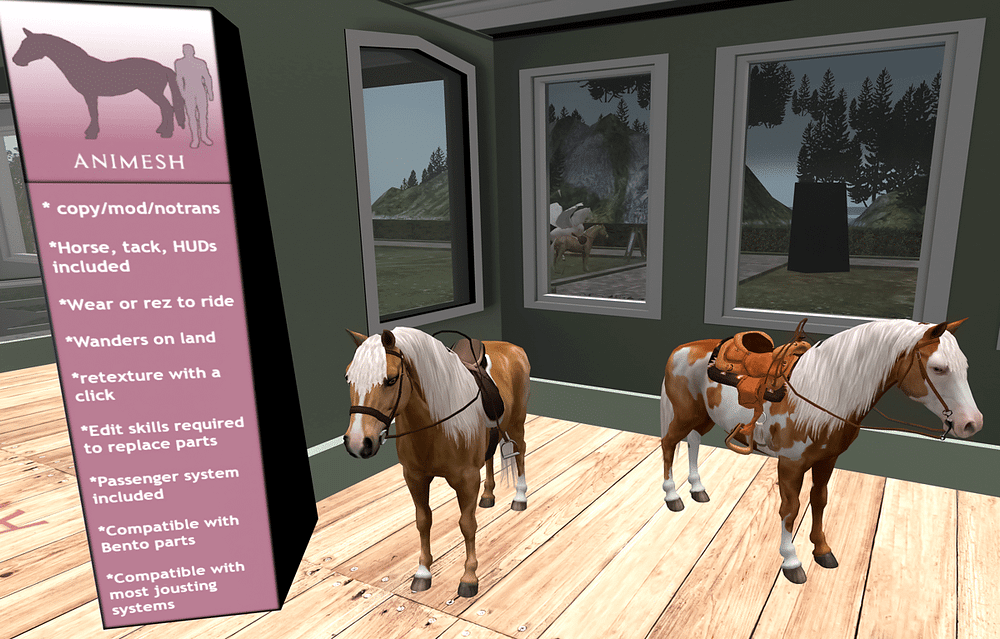 With Waterhorse, you get what you paid for, which is greater details. Below are three Animesh horses decor rezzed on Newall Sand (there’s HUD to customize them).

Animesh horses from Teegle are cheaper at 1,500L. Teegle offers add-ons, such as interactive feed and water buckets. Teegle also offers decor and stalls, and even a foal that you can link with any of your owned Teegle horses as the mother. Adorable. You can rezz the horse or add it to ride.

This is my Teegle Animesh horse that I let roam on Newall Sand. If you can’t afford a Waterhorse, this is a great option without breaking the bank. Beside, Teegle has heaps of add-ons.

It was my idea that snakes would be the most common Animesh pet in SL as I imagined a snake would be easier to make, but I only found one, a ball python from Clover from at  999L.

Some of his features intrigued me: “The Clover ball python is able to interact with the world around it with ease, and each snake has its own likes/dislikes. Two snakes might get along together, whereas two other snakes might attack one another. Each Clover pet has the ability to interact with other pets around it, If the snake is around a mouse or a rat, it might attack the other animal.“

Although I can’t say I have noticed any of that happening yet, but not hanging around that area enough to find out either …

There are enough options to meet different expectations with features, styles and budgets. It will really depends on what you’re after.  Rezz Room is in the lead for the varieties of pet companions, and possibly the most realistic ones if you have the budget for them. SEMotion will get you by with small prices and fantasy Animesh companions.

Animesh will always be a hard sell as a rezzed object because of the amount of prims they require, but I would love to see more of them, not just as companions, and hopefully we will see new Animesh creators in 2021.

What is your favorite Animesh pets and why?

If you know of any great Animesh animal I should check it out, please message me in-world, in the comments below or through website.

And don’t forget to visit Aussies Shores if you want to see most of the animals mentioned above.