I’ve been wondering since the first time I’ve seen Astralia cooking system out, what it was all about. With the lack of proper reviews or even a simple video to show what it does, I couldn’t justify spending my Lindens. Until now. My curiosity took over partially because I wanted a turkey on my dinner table. Yeah, yeah, I could have gotten the Dust Bunny one for that kind of price, but Dust Bunny doesn’t need a review or a how-to-use guide. What mostly annoyed me with this Astralia product is that, yes there was a display, but it didn’t explained what it was to do exactly. Frankly, an interactive system should have a video, or the so-called bloggers should be more forthcoming about what they “blog” about … But, I understand as I can feel some sort of ban flying over my head… Welcome to Second Life.

And so I went to Uber’s new round for December 2019 to buy Astralia Volume 8: Roasted Turkey for 499L.

Let’s start by discussing the cost. It might sound expensive for some including me, but nowadays there are no standards with pricing in Second Life. In comparison, for that same price you can get the eggnog dispenser from Chic Chica which is absolutely awesome. For 499L you can get a pair of boots from Fashionatic. 499L can also get you the Kraftwork curtain system. In the end, it all depends on your budget and why you should buy it, or not.

In this pack, you get five items: a recipe book, step 1, step 2, step 3 and the plates full of turkey and vegies.

What does Astralia cooking system do?

First you need to place all the items where you want them. In a logical manner, the prep board would go on the bench, the prepared turkey in the oven, and so on.

Second, you click on the cookbook for steps 2 and 3 to disappear. Main set up done.

When you click the cookbook it gives a brief history of the dish you’re about to cook in local chat, and step one appears: the turkey on a cutting board.

[18:12] Roasted Turkey: Roasted Turkey is a popular dish, especially in North America, where it is traditionally consumed as part of culturally significant events such as Thanksgiving and Christmas, as well as in standard cuisine.
It’s very easy but super delicious! Let’s start flavoring the raw turkey with erbs, pepper and adding citrus fruits. Click on the book again, step 1 will disappear and be replaced by step 2 which I had placed in the oven during set up (the grill in my oven can’t be moved, but who’s going to notice that little details?) 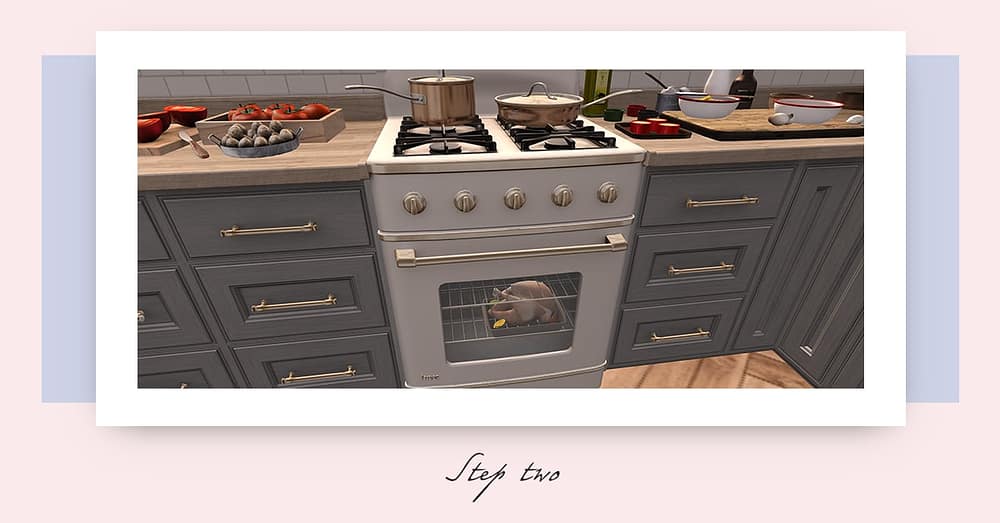 [18:13] Roasted Turkey: It’s time to bake the turkey! Place the whole turkey on a rack in a roasting pan, and into a preheated 350 degree F (175 degrees C) oven. The general rule for cooking a turkey is 20 minutes per pound, but it may vary from oven to oven. You can now click the book again to proceed to step 3!

Click on the cookbook once more, step 2 will disappear and be replaced by step 3 which is the Roasted Turkey placed on the dining table at setup.

[18:13] Roasted Turkey: what a great golden turkey! You can almost eat it with your eyes.. It’s perfectly cooked and it smells amazing. Now just call your guests at the table to enjoy this traditional meal all together ♥

To start over preparing the recipe, click the book one more time.

There are no poses. The system simply consists of food appearing and disappearing except for the plates with food which are a permanent fixture.

How effective is the Astralia Cooking System?

I like the concept. It’s simple and it works, but it could be greatly improved.

The last step should includes the plates with the roasted turkey as it seems silly to have the plates with food set up on the table before the turkey is cooked. Or maybe even have the empty plates, and food appears when you click on an extra step?

Once the turkey is in the oven, we should get a message after 20 minutes to say it’s ready, or even better, have an option to choose how long it needs to cook. Again, it all depends on your roleplay. Maybe you’ve invited your date and you want to talk for 40 minutes before eating. Maybe your date only has 15 minutes…

Also, step 1 which is the prep, should be hidden until you click on the cookbook to start the process. Say you have all volumes or even just a few of them and intend to do a dinner roleplay, you would setup the steps before hand, or you could chose what to cook depending on the time of the day for example. If’ you have to show all the step 1 for eight cookbooks then it becomes messy.

Is the Astralia Cooking System worth the expense?

I guess it all depends on what you do in Second Life. If you’re after purely decor items, then that might not be it. I can’t imagine my friends being into that kind of roleplay on Second Life, but because they’re up for any banter, they’d go along with it.

If you’re into simple roleplay, it might be worth it as it works and is easy to set up. I’m unsure if there is a similar or more advanced system out there as this is not the kind of stuff I would actively look into buying. Astralia is a popular brand and actively presents at lots of events, so this is how I came across it when it first came out.

Though for me to invest in all the volumes, I’d have to see the improvements mentioned above, or maybe buy it when a 50% sale is on. When I spend 499L with Chic Chica, I get a nicely detailed system (dispenser) and decor. It also comes with a top notch pose for everyone to enjoy, so I don’t question the price (though I wouldn’t like her prices to go up unless justified).

Astralia is on to something, and I’m hoping she will take on board this constructive criticism as not many creators do, or are even willing to discuss it. I have no idea what it takes to make such system, so there might be some limitations, but I sincerely hope it will be improved. And if it does change/improve, please let me know.

Over to you, what are your thoughts on the Astralia cooking system?