Which is the perfect kitchen in Second Life?

The features of a kitchen in Second Life depends on what you do in SL. Some people do roleplay, so a kitchen that has a lot of cooking interactions might be the way to go. Some people just like to take pretty pictures or just want their kitchen to look good, therefore they couldn’t care less about the functionality of it. And for some people it’s all about the price and the amount of prims.

Since Dust Bunny and Consignment collaborated to launch their Rosemary kitchen, now is a good time to compare it with the Modern Farmhouse kitchen from Hive store released in May 2019, which received an update in June 2020.

Warning: this is a review so I’ll be picky. Yes, this is Second Life,  a “game space” for some, but we all have different expectations in SL, so I’ll be looking at different aspects to suit different Second Lifestyle.

In terms of kitchen I have used the {vespertine}small spaces kitchen which is great when limited in prims and space, and you don’t need functionality. (Note: A 4-star rating is unfair and happily gave it five stars.)

I also have a MudHoney kitchen that I bought in 2016, but when I moved in the Palmview house from ROOST, it didn’t look right in it in that big space, so ended up buying the kitchen that was made by ROOST specially for that house and was happy with it. It is low prims, looks good, doesn’t have any poses, but I didn’t need my kitchen to be functional at the time.

Hive released their modern Farmhouse kitchen not long after I moved out my Palmview house and had gone back to my MudHoney kitchen.

My excitement for the Dust Bunny & Con kitchen died the minute I was at the store and saw someone sitting on the island bench. Hell, no, I thought. A small detail I know, especially for Second Life, but I can’t imagine anyone sitting on a kitchen countertop like that. Anyway, that wasn’t going to deter me, especially looking at the fridge, which I thought was the best part of the kitchen.

The Rosemary kitchen cost 1400L per colour and there are four to choose from: white, black, navy and grey. I chose white because it’s an easy colour to match with most house interior. Although I had seen the navy one in a picture on Flickr and it looked great.

There is also a decor pack for 500L for which I wish there was a chart of some sort to clearly show all the items at once. Isn’t it nice to know at one glance what you’re getting?

The decor pack has quite a lot in it as you can see below: 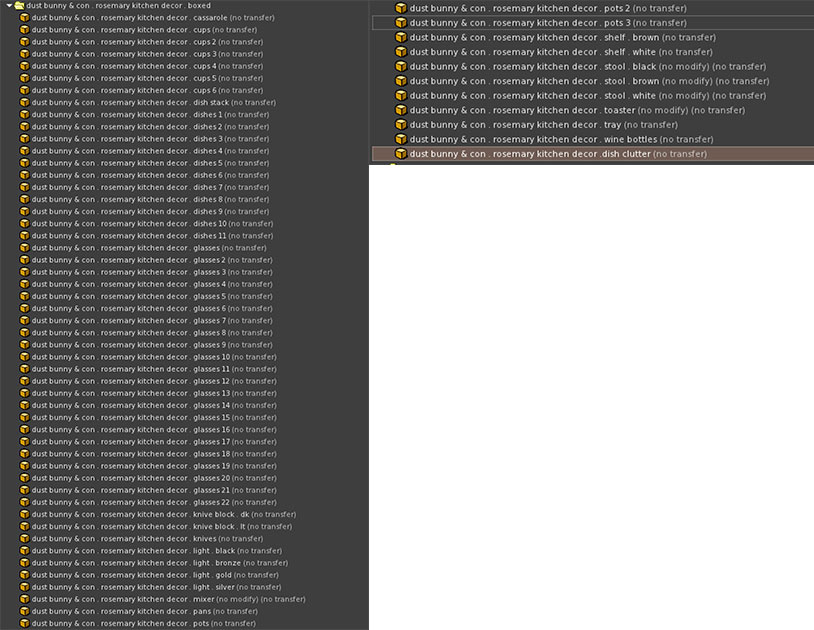 A picture chart would have been handy though to see exactly what they all are without having to rezz everything.

I didn’t expect to find the stools in the decor pack as I assumed they were part of the kitchen. Stool is using AVsitter  2.0 ( I mention this because I have a friend who will only buy stuff that is the latest AVsitter and at the moment I think it is up to 2.2, but more on that later) and has some of the most useless poses for a seat.

I have to wonder how do Second Life creators choose poses to add to their furniture which was something I asked myself when checking out a piece by Scarlet Creative. And just the other day, I tried a beach chair that had not a single pose you would use while lounging in the sun. Do creators add poses for the sake of adding them? I’d rather have three relevant poses than eight irrelevant ones, wouldn’t you?

I was hoping I could use some of the pieces with my kitchen, especially the fridge, but it is fitted with the cabinet. And everything else is. I also was hoping I would be able to use the kitchen island, but there is no option without a sink. Since there are two cabinets with the sink, I wonder why there is no plain island option.

The dishwasher door and oven doors come with a door sound, and that bothered me. I always have SL sound on. I’m so used to hear that particular sound when a door or window opens and closes, so it is bizarre to hear the same sound with kitchen appliances.  Unless you need to take a picture with the dishwasher door open, I don’t see why you need it opened at all and there is no poses, so it would be easy to remove script and sound, but if you have to add a sound, why not use the appropriate one? There is also a fitted microwave with no functionality.

I was surprised Dust Bunny sells each colour separately since other sets from Dust Bunny – such as the laundry – come with a HUD to change colours and other details.

The Hive Cozy kitchen has a static dishwasher, so you can’t open it and is just one prim compare to the five-prim unit from Dust Bunny & Con.

Both Hive kitchens fcome with two versions of the fridge and they all have poses. One version is static so door fridge can’t be opened and the other can be opened to display food inside. The Cozy kitchen static fridge is three prims, and the full version is five prims. The Modern Farmhouse kitchen fridge does come fitted with the cabinet and the full version is  seven prims while the static version is five prims. Dust Bunny & Con fridge is 11 prims and has no poses.

Hive kitchens have lots of poses and it’s your choice to rez the adult version or the PG version compared to Rosemary kitchen which has some poses – mostly unrelated to cooking –  a mixed of adult and PG.

To clarify a few things I asked Hive what are the differences between the AVsitter versions. She said she was “unsure about v1.29, but anything from v2.0 and up has no difference to the user.”

“I used to name poses but the buttons are very small and try to name each pose something unique while also describing the pose in that space crosses my eyes after a while,” TheHivestore said.

“I recently release a dining table set at an event, and I did name the dining poses as it’d be nice to know if you are going to eat a meal or drink something, so it definitely depends on the item; I tend to switch it up.”

The recent update for the Farmhouse kitchen was to change to better scripting to provide less lag/bulk in the scripts.

“It became so much lighter than some cabinets actually went down in LI,” TheHiveStore said.

Which is great to know considering that I have nine kitchens from Hives rezzed in my rental houses, although tedious work to replace them all with the updated version.

In terms of kitchen decor, Hive doesn’t have a specific kitchen pack, but you’ll find lots of different items for your kitchen around the store.

In conclusion, which is the perfect kitchen in Second Life?

In terms of prims and cost, the Hive kitchens are better value, especially if you also want lots of kitchen related poses for Second Life roleplay.

DustBunny & Conn is a beautiful kitchen, great for pictures, but you’ll need lots of prims. In terms of price, what is expensive or not is relative, but this is what Dust Bunny had to say – and transparency from Second Life creators is always appreciated:

In terms of how long it takes to make furniture in Second Life, I have no idea, and maybe SL creators will want to enlighten us in the comment section below, but chatting with Hive about poses she said, “The more poses you add, the more tedious it is to set up. Setting up ~100 poses recently took me over 12 hours, but it gives customers more options.”

There you have it, well, sort of. Time equals money, Second Life or Real Life.  Anything you build takes time, and for some Second Life creators it is a full-time job. It is up to them individually to decide  how to price and what to include in their services/products as there are no rules. We, as Second Life consumers, can only offer feedback (which is not always welcome or very well taken by some).

Even though Dust Bunny & Con Rosemary kitchen is gorgeous and even though I have plenty of prims at my disposition, the Hive kitchens are better suited for my needs, but what about you?

I would also like to add that Dust Bunny & Con and Hive are not the only ones in Second Life selling kitchens, and lately I have noticed quite a few new furniture brands coming out. I would encourage you to leave links to your favorite kitchen with a few details as to why you like it or why you recommend it and thanking you in advance.

Until next time, have a fabulous time on Second Life and take care.