I’ve already ranted about handbags in Second Life. It’s a love and hate relationship. I get disappointed almost each time I buy a new bag. I keep saying I’ll never buy buy another handbag in Second Life unless there was a demo, but of course, temptation is most of the time too great. And, after all, isn’t it the whole point of those events? Discover new stuff and … I digress. That’s a story (or rant) for another day…

I can hear my friend talk to me in the back of my mind, “Pris, do you want to be banned again?” Of course not, but if all those so-called bloggers were doing a better job of actually portraying a product the way it actually is and what it does instead of pretty pictures and links, I could potentially be satisfied with all my purchases and save Lindens. Though please posting links and links, because Flickr is mostly where I find my stuff. I just wished the links were in the description rather than having to go to another site …

Let’s start with some warnings/disclaimers:

Once again, this should be taken as constructive feedback. Take it with a grain of salt or leave it, but think about this: without real feedback, how are designers supposed to know what we want and fulfill our needs and desires?

I bought a new handbag from Basec because it looked nice in the picture if you can overlook the naked body and the vagina (link to the ad in colour). 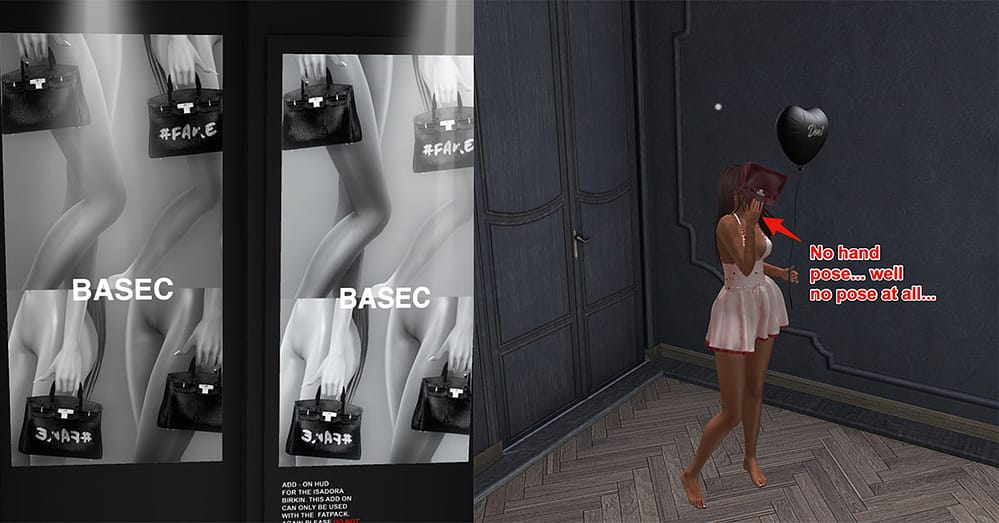 250 Lindens later, I am left disappointed with a handbag that I can only use when doing photography.

If I knew it was not possible to offer a product with a pose in it, I wouldn’t question it, but since others are doing it, shouldn’t all the designers have the same standards? Chic Chica has set the standard in props. I admit; sometimes I’ll have a whinge about her prices, but her props never disappoint.

Access event opened and Moncada Paris is there with yet another expensive handbag. I have mentioned them before. Their advertising is impeccable but I couldn’t justify to spend 999 Lindens. For the sake of this review and to prove a point hopefully, I bought the clutch. My Lindens balance didn’t like it, but I had to see it for myself: do you get what you pay for?

Before buying it, I went to the mainstore to check out Moncada Paris first release, but for the same price the one at Access has 10 poses instead of 6. The first bag was better advertised, but at the event, there is a slideshow set up showing all the poses, and oh boy, they look good. At the time of writing this, I have not yet unpacked the bag. I’m a bit nervous. 999L for a clutch?! What the hell is were you thinking, Pris?! Okay, let’s do this.

Still not convinced about the 999L price tag but, wholly cow! It is everything you would want in a Second Life handbag. And that “French Touch” pose is absolutely adorable! Almost made me forget how much it cost me. I’m not going to lie, I LOVE the clutch. It has several poses, all mirrored, and they are awesome. Since it’s a fatpack, you can match it to whatever outfit you wear. The best part: even when walking the clutch does not move. I’m so impressed. It’s way better than I expected. 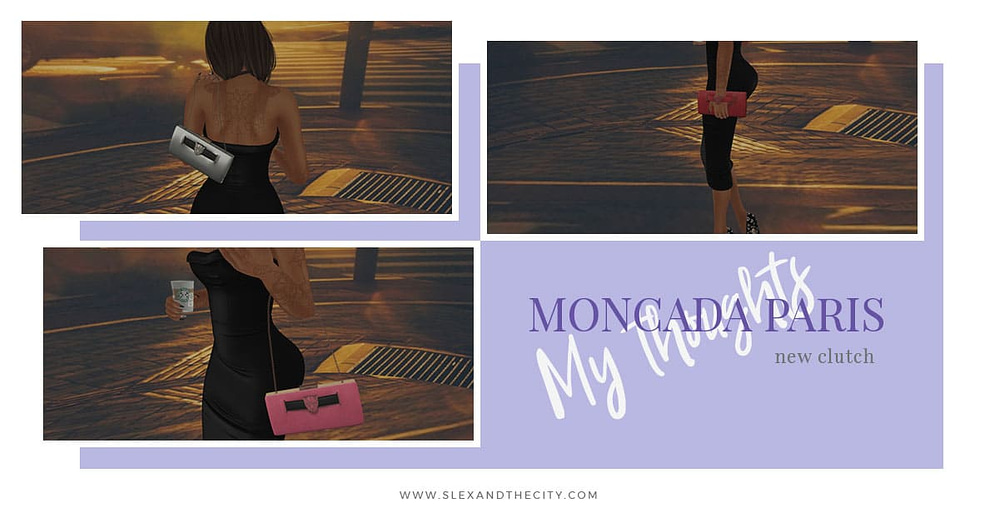 The Graci handbag by THE OAK had been my favourite so far. I bought it quite a while back, and I’m pretty sure I only paid 250L. It has nine poses, overriding the AO and is a fatpack.

There is no hand pose with the Graci handbag, but I’ve had it for so long that it could be that it was made before Bento became the norm. All I had to do was use a hand pose from my Maitreya HUD, which is okay. It is still a good handbag and a brilliant buy for 250L.

On Second Life there is no policy for pricing (come to think of it, I’m not sure there is a policy for prices in RL). Everybody charges whatever they want or what they think they deserve. I’m a consultant in RL, so I get it. Well-known brands will charge more than others and that’s how – I’m guessing – they remain exclusive brands. Not everyone can afford a whole range of skincare products from Dior or Chanel or a wardrobe from Versace, and that’s okay. Second Life is not immune from that same kind of  exclusivity.

So how much would you pay for a handbag on Second Life?

I like to be given the choice of buying just one colour at 250-300L for example. I have a budget, and if today I could afford to spend 1000L on a handbag, I couldn’t have done it last week. Some people just cannot afford that kind of price, but again, not everybody can afford a Louis Vitton bag either. As for fatpacks, the expensive ones, I’m a bit on the fence with them.

I considered joining the Moncada Paris group to save 99L, but there is a 100L fee to join the group which defeated the purpose. Group fee is another story, but briefly, unless I was getting a gift for joining, I don’t see the point of having to pay a group fee just to get a discount and especially since it seems to be a relatively new brand (and the fact that I only have three group slots available). I paid 150L for a group fee just to get a gift and left the group immediately. Paying for something is not an issue. The issue is what you get for your money.

I would compare a handbag to shoes and if N-core charges 450L for a fatpack and Reign 400-500L, I’d expect similar pricing for handbags with a fatpack. Is it more difficult to make a handbag than shoes? I have no idea. Shoes don’t have poses, so it might be easier to make.

When I can see quality like I’ve just seen with Moncada Paris’ clutch, I won’t hesitate to spend 999L again. I mean, look at the two bags side by side:

One colour for 250L but can only be used for photography unless you’re hiding from paparazzi as K said lol, or 999L and have different colour and look good with it all the time. Which one would you choose?

At the end of the day, spend whatever you feel comfortable with or can afford, but if you have to spend Lindens on just one bag, it is worth saving as you won’t be disappointed with the Moncada Paris clutch.