Share0
Tweet0
Share0
Share0
Tweet0
Share0
Table of Contents
Heading 2 Example
Heading 3 Example
Heading 4 Example
Heading 2 Example
Heading 3 Example
Heading 4 Example
It was no surprise when I got a message from a random guy offering his service as a servant. Most people would call him a slave, a willing one. Welcome to Second Life.
The offer was of no interest to me, but hearing his story was appealing.
We choose to join Second Life for diverse reasons. One of them is the opportunity to be someone you cannot be in Real Life for whatever motivation is behind it.
For example, many years ago I knew a man who was a father, and married to a woman in RL. In Second Life, he was married to a man. It is also common for women to join as men and vice versa. Some choose to join SL to enact their wildest fantasies, and experience BDSM. You could write several books about the reasons to join Second Life.
I liked Hans because his approach was simple and polite. You cannot be rude to politeness, can you?
“Greetings, Miss Newall. May I IM you a little? I don’t want to waste your precious time. I’ll be quick I promise. Nothing about sex, or money, no worries,” Hans said.
“What is this about then?” I had to ask. Something not involving money or sex is surprising when it comes to Second Life.
“Well, I am a servant, looking to serve and work for ladies who could enjoy having an assistant, a task man. All is free of course. I offer my services to ladies who might enjoy having someone doing tasks for them. Of course, it is a bit random. I don’t know you. I try my luck in case you would be interested and wanted to know a bit more.”
When you put it that way, yes, I do want to know more. And so, I asked him for an interview instead, as I suppose any writer/journalist would.
This kind of service wasn’t something new to me. Many years ago, a friend introduced me to her Butler (which was his SL name). He was following her around while she was talking trash to him, asking him do things like licking her feet and mine. Of course it all happened through emoting as this was pre-mesh and pre-bento. I didn’t think much of it, but she very much enjoyed it. He was rather annoying to be honest, sending constant IM begging for attention.
With Hans, it seems a bit different. He is not asking for attention like our Butler, quite the contrary. He does as he is told in silent, unless you ask him to talk, of course. I’m pretty sure you could make him read you book if you wanted to. While I was interviewing him, he cleaned my pool which is now sparkling clean. 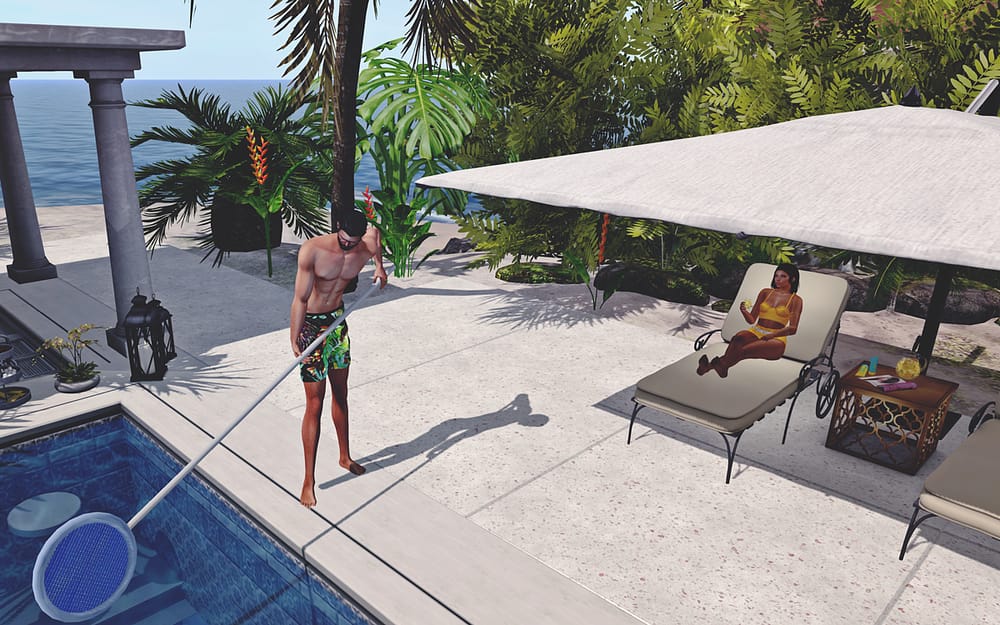 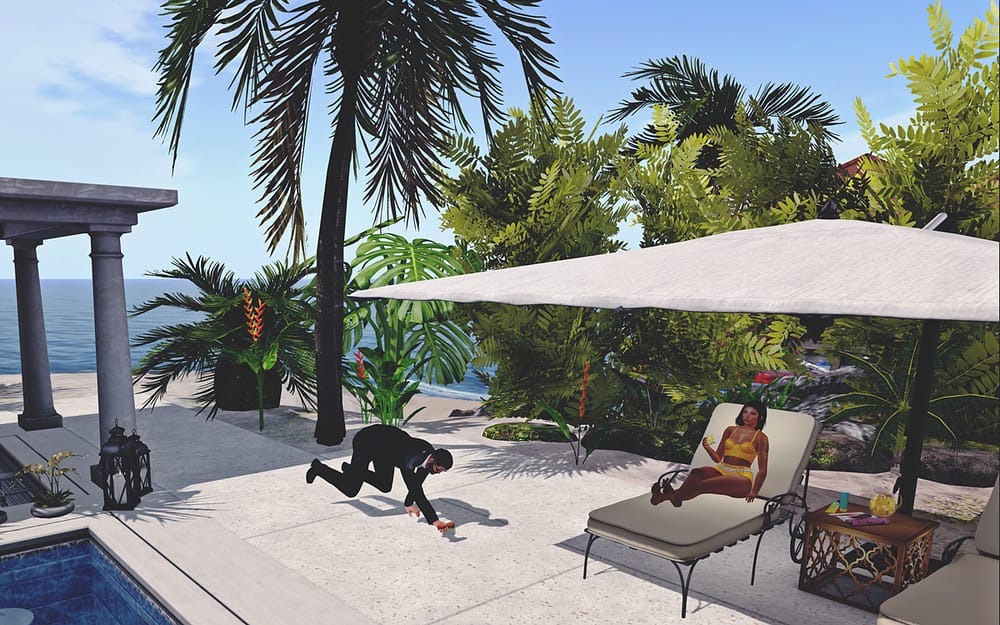 Free worker anyone?
Hans does anything you want him to do, for free, because receiving money would break his “pleasure to serve.” He even feels bad to be thanked. Hans doesn’t like doing boring stuff, but does it anyway. The idea of being a submissive to please the ladies is what he loves doing.
My friends says I am bossy, but asking something while not saying please and thank you is a bit harsh and hard to do. I was conscious of that during the interview, even though it was just that, an interview. I now do enjoy the sound of ‘Miss Newall’, so I will tell Sam – my right hand, family and friend – to address me like that from now on 🤣
For women who are by nature dominant and love to be in charge, I am sure they would love a servant like Hans.
“It’s a win-win situation.  The lady has no effort to do, no thanking or being nice. She calls me whenever she wants, ‘Servant, come here. You will serve drinks and shut up for as long as I want to,’ and I do it, feeling excited to lose my control.”

How does a Second Life servant choose his ladies?

Well, it starts with a fetish, of course. As much as there are no feelings involved, there is still a need to feel attracted to the ladies he serves. It makes sense. How else would you worship someone if you’re not attracted to them?
Hans is a heel fetishist, so wearing flat shoes won’t attract him. As such I wondered how he chose to talk to me since I was in my house when he contacted me.
“Most women in SL wear high heels,” he said, although on that day, I was lounging by the pool, therefore I was barefoot for once.

How do you become a Second Life servant? How did it start?

He took a chance and asked. The response was a surprise as he thought the rejection would be 95%. Hans reckons that 50-60% women want to try. Meanwhile, 40% of women politely reply, ‘I wish you to find a lady like that; I’m sorry I am not into it.’ Only 1% were rude to him.
“Even more surprising is the number of women who enjoys it after trying. I even remember one who now lives a BDSM lifestyle. She discovered this side of her, thanks to my service, realising she enjoys very much that power over men.”
What about the sex part? After all, this is a kink of some sort, and it would get you sexually stimulated, wouldn’t it?
Hans says he’s never had any feelings for any of the ladies he has served so far. He gets excited being ordered around and suffering mentally for a dominant woman. The sexual component is in his head, and stay behind closed doors.
Hans will stay by your side, while you do your own things such as chatting with a friend for hours. Being ignored is part of the submission and humiliation. This is what Hans loves, and can bring him to masturbate. That private side of Hans though remains behind the screen and is of no interest to the ladies. They don’t ask, nor do they talk about it. Their main interest is having a man as a servant and to enjoy bossing him around.
There is no contract, or specific times, nor is he exclusive. He is a ‘servant on call.’ He has a list of women, and when one calls he obliges. If another needs him at the same time, he tells her he is already in use. A set of rules is explained when service commences.
“Sometimes no one calls me for a week, then I’ll get three calls at the same time.”
If the lady is in a relationship, he can still serve. “They use me as a family butler, house guard, etc.”
Before Second Life, no one knew about his BDSM tendencies, because he felt ashamed of it. “SL helped me assume this side of me and to discuss it with my friends and family.”
This works for Hans because he loves to be treated as a willing slave, with no care or empathy. He doesn’t develop any ‘love’ feelings for any women, which doesn’t mean he is careless. He just can’t form any sort of friendship because he would then lose his “slave” side.

“I have worshiping feelings. I see the woman as a Goddess, unreachable.”
Ladies, I am dying to know your thoughts on this. I mean, it’s free, no commitment: you can use him just once if you like. No sex, no feelings, so no headaches or drama. It’s a bargain, isn’t it? Please, tell me what you think in the comments below. And look up Hans if you want to try his service.