Second Life dispensers are objects that give your avatar a – sometimes animated – prop, mostly food or a drink, but it can be other things.

Back in the days, the prop would go to your inventory and you had to manually attach it to your avatar. Nowadays the prop – should – self-attach and – should – have a Bento pose. I say “should” because this is 2020 and when you know what can be done in Second Life now, it sets new standards when creating objects, but not everybody seem to be on to that.

That’s how I decided to have a closer look at what dispensers are available and what makes them good or bad.

It baffles me that in 2020, some Second Life creators are still creating dispensers the old way. It might not be worth updating old dispensers, but new ones should have self-attached props with Bento poses. I mean, come on people!

In case you don’t know, I’m a huge fan of Second Life dispensers. I have plenty in my house and I add them all around Koala Beach and in rental houses. I love anything that adds interaction in Second Life. It makes Second Life experience more interactive and more fun I think.

A few months ago I reviewed MadPea Smoothie dispenser. I always imagined MadPea to be on top of their game, so it shocked me that the prop went to my inventory and furthermore it was poorly animated.

At C88 April 2020 round, Fancy Decor is selling their Satie Coffee set which has a coffee machine dispenser. Furthermore they offer a special edition of the coffee machine if you buy the Fatpack. The whole set is cute, until you try the dispenser and get your coffee delivered to your inventory… WTH Fancy Decor? 2020…

Next, I was excited by a nachos dispenser from Lucas Lameth. Chic Chicca has a nachos plate which I have of course, but unfortunately it’s not a dispenser (hint hint Lilo Denimore…). 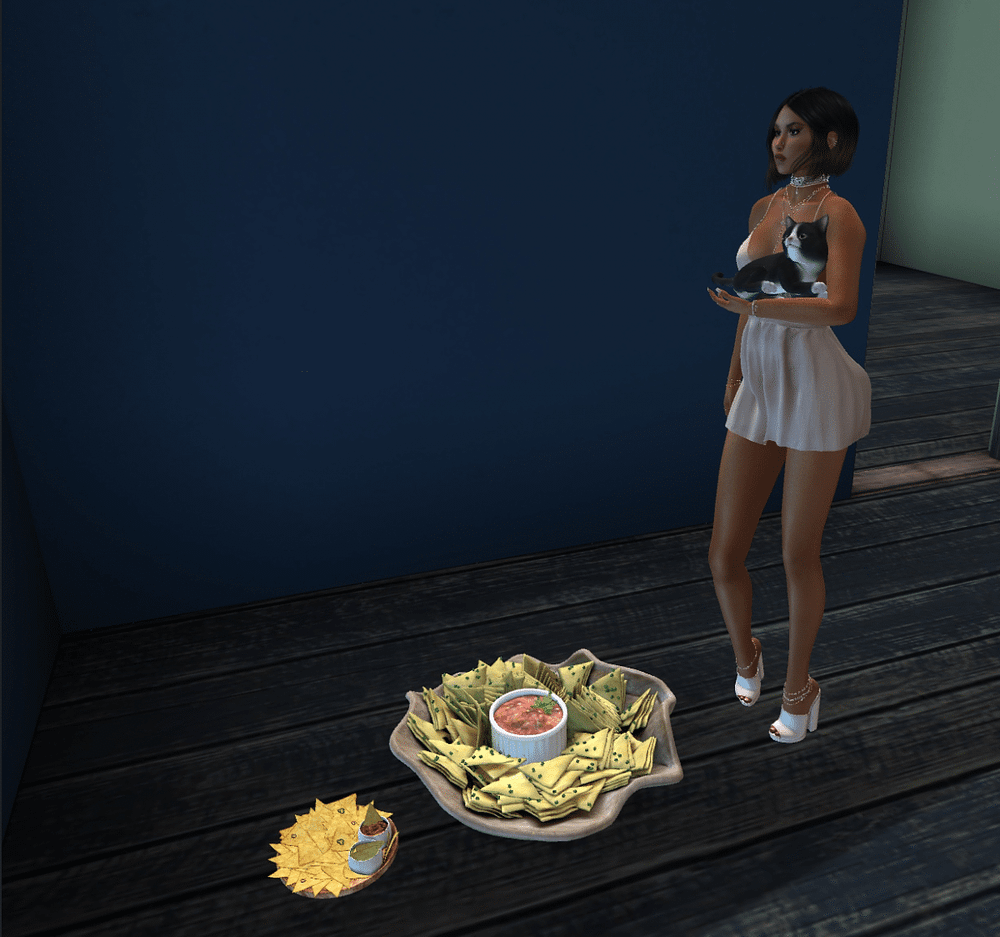 The nachos tray at my feet is from Lucas Lameth, and at first it was no mod no copy, so couldn’t be resized, but he fixed that after I sent him a Notecard. There was three updates made to it since then, but beside being able to resize it, I’m unsure what the other updates were about. The nachos plate is from Chic Chicca and is purely for decoration, though it comes with a single self-animation. Even though Lucas made the tray resizeable, the corn chip in your hand is still the size of a pizza and the Bento pose is poorly executed that instead of “eating” you’re poking your brain, “wake up, wake up brain.”

I ended up trashing the dispenser from Lucas and remembered I bought his tea set which I had not yet unpacked. It was an impulse purchase. I saw it in a pic on Flickr. Thought it looked awesome. Bought it without realising it was a dispenser. 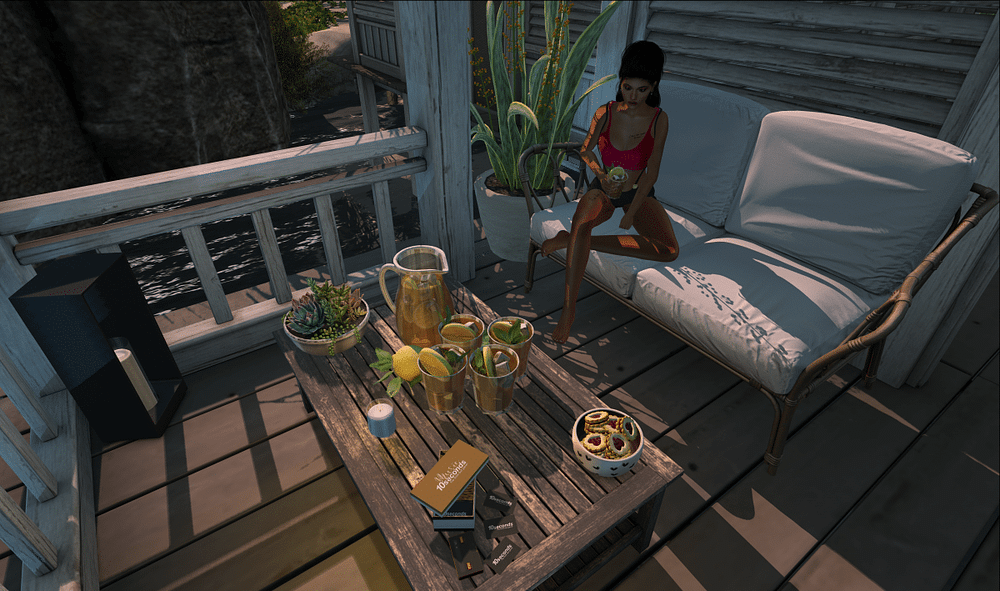 The textures for this set are absolutely fantastic and it even looks better than the lemonade set from Chic Chicca (the closest thing I have to compare it with).

Lucas’ set might look better, but the self-attached prop is a fail.

The glass is too big compared to Chic Chicca below that gets it right with a drinking motion that doesn’t poke your head.

If one can do it, why the others can’t?

Interestingly, I contacted Bazar last year after buying a dinner plate which looked like it was made for giants and while I was able to resize the plate, the food stayed huge. Bazar replied that it couldn’t be fixed. Again, why some get it right and others don’t is a mystery.

Of course, what will make people buy something that might not look as good, is the price, but also the amount of prims, because prims are the way of life in Second Life. We will be forever counting them.

The tea set from Lucas is 2 prims  compared to Chic Chicca’s lemonade which is seven prims. The nachos dispenser from Lucas is one prim compare to the nachos plate from Chic Chicca which is only decor with 11 prims, but it looks so real that you get hungry just looking at it.

The reason I bought the crème brûlée set from Andika is because Chic Chicca doesn’t have a dispenser for hers, only a self-pose, and the flan looks cute. Everything on the bench is one prim each except for the dispensers that are two prims. Andika’s style is different from Chic Chicca, but Chic Chicca’s Crème brûlée looks slightly better than Andika (though the picture does not do them justice), which shows that detailed objects can be achieved with fewer prims – so if someone could explain why some objects are so high prims, that would be great.

At the bar, I have gin, cans of Cola and bottles of lemonade from no.59. All of them are 1 prim each. no 59 has great drinking animations and you will not poke yourself with the straws. A little extra touch I love that no.59 has is sound effects. I have single bottles from Chic Chicca, all of them dispensers and only one prim each, but the tray full of mini Champagne bottles is eight prims. The chips and nuts are from Cinoe.

It was my first Cinoe purchase which I discovered at an event. The set also had pizza and beer. I didn’t buy beer because I’m pretty sure Rich has a beer dispenser from 220ml which I’ll have to find. With the pizza I didn’t like the pose. It seems pizza and toasts are difficult objects to pose in hands, therefore it looks strange. Besides the peanuts and chips, I’m not very fond of the textures, but Cinoe has everything else perfect. I also like that there is a clear button and if you chose another prop it will be automatically replaced, when with other dispensers you usually have to detach them.

Cinoe has loads of dispensers and not just for food and drinks, so really worth checking out the store.

Lastly, I had to go to the Man Cave to check out Lucas’ oyster tray.

If Lucas Lameth is a bit of a let down sometimes for the look of his food and drinks dispensers, he has the best creative ideas, and all are low prims. He is still a brilliant creator for plants and original decor and I could not fault him in those departments. His potted ficus trees are by far my favorite pot plants if I had to choose only one. The fact that he brings out food rather than drinks which we can leave that up to No.59 and Chic Chica, it is giving him the edge and can share leadership in the food and drink dispensers arena.

I’ve noticed lately some creators seem to step out of what they normally create, and while it’s fine to try out new things, maybe sometimes it’s best to stick with doing the things you do extremely well? Although it is always great to see newcomers, and welcome fresh ideas even when not perfect.

I understand that many Second Life residents don’t care about the little details, and that’s fine. I enjoy watching what creators come up with and how far they will go to bring out better interactive products, and where their creativity will take them, and us as consumers. Hopefully it also help you buy Second Life wisely if you’re after something specific and dislike wasting Lindens when there is no demos available.

What’s your experience with Second Life dispensers? What’s your favorite one? If I’m missing a brand, please let me know about it. I am already working a second round as I discovered a few brands coming out of the blue horizon.

Until next time, enjoy your pixelated food and drinks. Don’t forget I also have a Flickr Group dedicated to that topic, and the best way to see what’s available on Second Life.