Most of the time, I just drop by the store to pick up the group gift and that’s it. I have 1000s of poses in my inventory, and never used most of them. That’s why nowadays I rarely buy new poses unless it’s a really good deal, or I really really really love it. Getting a new random pose as a monthly group gift from an awesome creator is a no-brainer, but I can’t help feeling a bit disappointed with this one.  And, I know: it’s free, so it’s not like I paid for it, even though I paid for the group, and it is my choice to use the pose or not.

FOXCITY. VIP – Anti-Drama Squad is “inspired by the recently released Foxy drama spray and DOES NOT come with props. The other prop shown is by Peaches ‘n cream”, Satomi Masukami mentions. Notice she doesn’t give you any links…

Fair enough, I go and look for those props.

The drama repellent is Heat Wave Gacha – Epiphany Exclusive by Foxy. You can get it by collecting 25 Epiphany points, and it will not be available after the event is over… So… I’d have to spend 1875L (25x75L) at Epiphany to get it. No thanks. Next. 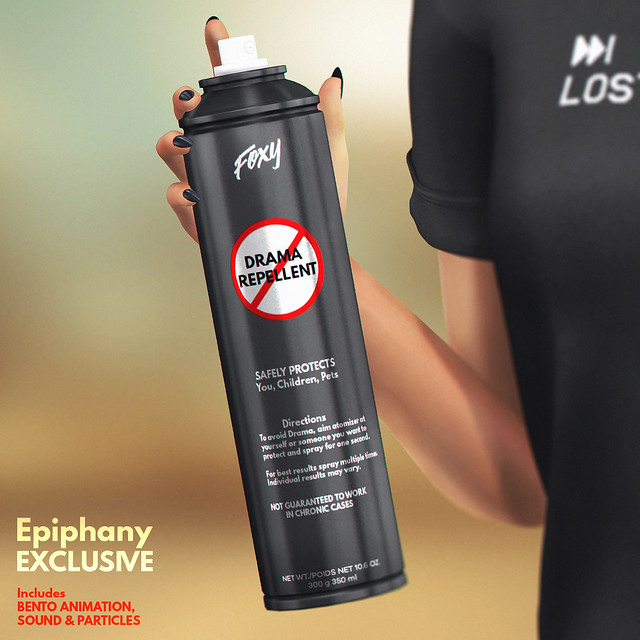 The next prop is Peaches ‘N Cream – ‘ BITCH B GONE’ Repellant Spray, and I really like it. 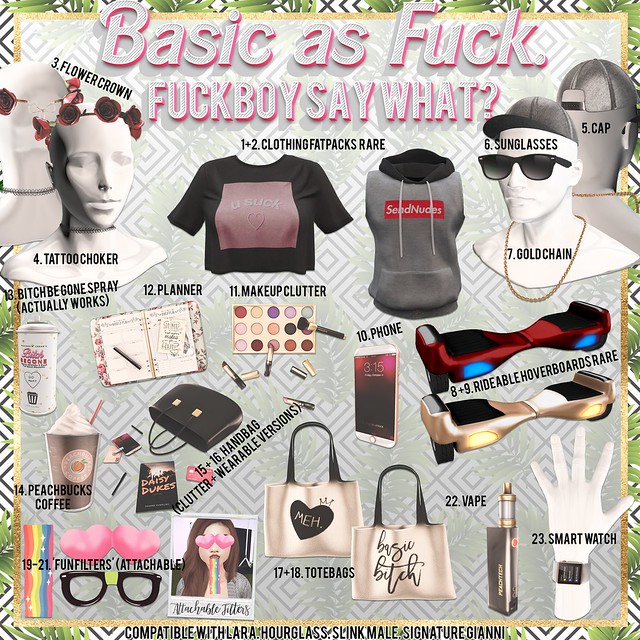 It also looks like it’s a common, not rare, so there should be hope, right? It took me a while to find it on MP, because I didn’t have the correct name. And if it is a common, either everybody loves it they kept to themselves, or it is one of those commons that is not common after all as I could only find one.

Yes, you are seeing right: 1000L. And there is only one (https://marketplace.secondlife.com/p/Peaches-N-Cream-BITCH-B-GONE-Repellant-Spray/14420525).

Time to drop by Peaches ‘N Cream mainstore where I played three times just for the sake of it (75L).  Granted, I got the rare T-shirt, a bag, and the watch. No spray.

My disappointment with this set is that no alternatives for props have been offered, so a lot of us will find this pose useless. I searched for drama spray and repellent spray on MP and the results are pretty poor. I guess this is where creativity will come in, but mine is limited at this point. So far I’ve seen only one pic on Flickr and the two girls are using the Foxy spray.

I’m not going to complain about Foxcity because overall, it’s one of the best paid groups as she makes sure there is a gift every single month, unlike many other overpriced groups with a few gifts a year. I highly recommend Foxcity. I added her poses to my Lumipro and to my surprise,  it was over a thousand of them… I also have lots of her backdrops.

Foxcity group is still 300L as far as I know, and I think it’s a more than fair price for a without-fail-monthly-group-gift, even if a few of them you might never use., so don’t be let down my opinions. Customer support from what I’ve seen is also top notch.